Smoking meat can be a long, arduous process, and while electric smokers are said to be easier to use, does that also mean that you can keep it going right in your house while you get other things done?

Electric smokers should NEVER be used indoors. They work perfectly fine outdoors, but using them indoors is risking the lives of everyone inside the building. In theory, you could use it indoors if the air was being vented outside consistently, but experienced pitmasters don’t recommend it.

Electric smokers are great for creating a nice, evenly smoked brisket, but they aren’t compatible with the inside of a house. Putting electric smokers indoors is like shoving some Mentos in a can of Coca-Cola. They’re both harmless by themselves, but nasty explosions can occur when they’re mixed.

Electric smokers do what most smokers do–produce smoke. And even though these bad boys don’t require charcoal or propane, they’re still producing smoke from the wood chips used in order to add the smoky flavor to whatever you’re cooking. And when wood chips are burnt, they produce a gas known as carbon monoxide. Carbon monoxide is (mostly) harmless on its own; it only gets dangerous when it’s trapped in an enclosed space.

According to OSHA (Occupational Safety and Health Administration), carbon monoxide (also known as CO) is dangerous because, when it’s trapped in enclosed spaces, it “displaces oxygen in the blood and deprives the heart, brain and other vital organs of oxygen. Large amounts of CO can overcome you in minutes without warning — causing you to lose consciousness and suffocate.”

Carbon monoxide poisoning is not only dangerous; it’s extremely deadly. According to the CDC (Centers for Disease Control and Prevention), around four-hundred and thirty Americans die every year due to carbon monoxide poisoning, because carbon monoxide fumes can come from “furnaces, kerosene heaters, vehicles ‘warmed up’ in garages, stoves, lanterns, and gas ranges, portable generators, or by burning charcoal and wood.” CO can build up in fully or partially enclosed spaces, killing any people AND animals in those same spaces. If nothing else, keep the electric smoker out of your house to keep your dogs and cats safe. Think of the pets.

For this reason alone, you should never keep electric smokers running inside your house. And while it might be tempting to think you still could keep it running in your house as long as you’re aware of the CO poisoning, think again. Nobody can tell when carbon monoxide is in the air; it’s odorless, colorless, and tasteless, hence why it’s so aptly nicknamed the “invisible killer.” We know it sounds like a documentary title, but it’s true. By the time you realize you’re being poisoned, it’s probably already too late.

Keeping your electric smoker strictly outdoors will solve this problem instantly. CO is harmless out in the atmosphere, where it doesn’t get a chance to build up in your living space. And while CO is bad enough, it’s not the only reason you should keep your electric smoker outdoors.

Smokers get really hot for really long periods of time, so it should make sense that they’re not the best when it comes to fire safety. If you live in an apartment complex, a condominium, or any sort of high-rise building, there’s a high chance that the management rules against allowing any smokers (electric, gas, or otherwise) in or on the building at all. They’re a huge fire safety risk, and using them (even on the outdoor patios) could set fire to the entire building. But why? Well, there’s more to it than just “smokers get really hot.” Some electric smokers are especially prone to causing fires due to a flaw in their design. One version of a Masterbuilt Electric Smoker had to be recalled because there were at least six different reports of the models catching fire spontaneously. This happened because the wood chip tray had a tendency to slide and get stuck within the smoker, making the wood chips combust and “causing the smoker’s door to blow open and cause a fire.”

Even electric smokers that were properly made are a fire risk–that’s just how they work. It’s somewhat common for wood chips to burst into flames in most electric smokers, which is why many pitmasters keep a spray bottle of water handy. That way, they can slide out the burning wood chips and cool off the flames at a moment’s notice. And a spontaneous fire is much harder to take care of in an enclosed kitchen than it is in an open, aired-out space.

Even if you do use one indoors and the smoke doesn’t turn into a fire (or produce noxious CO poisoning), the smoke smell will linger in your house for the rest of eternity. And while the smell of smoke does have its place (and it certainly makes brisket taste delicious), it can be overwhelming in a small, enclosed space.

If you use an electric smoker indoors, the best-case scenario is that it will give everyone a migraine from the lingering smell, and the worst-case scenario involves the house burning down (but CO poisoning might kill everyone before that even happens).

The most obvious alternative to using an electric smoker indoors is to just move your setup so it’ll be running outdoors instead. This might take some effort, especially if you’ve already set it up indoors, but it’s worth it. Saving your life (along with the lives of the rest of your family) is worth a little bit of inconvenience from moving the smoker out on the back lawn.

But what do you do if you do live in an apartment complex, and you don’t really have a back lawn? Don’t worry; while you can’t buy a traditional smoker (electric or gas) to use inside, there are some other options made for pitmasters working from less-ideal locations.

Some electric smokers are made to be used indoors, and they’re relatively safe, as long as they don’t use wood chips, charcoal, or gas for fuel. Check out this site to find the best options for indoor electric smokers, but always be careful and make sure to vent out the smoke to prevent accidental CO poisoning. 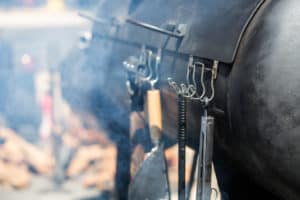 Whether you’re an experienced pitmaster or are just starting out in the world of BBQ, one of the biggest decisions you need to make is what kind of smoker you… Thinking about whether or not you should purchase a Pellet Smoker? Read on to learn some of the pros and cons of owning one. Pellet Grills can be a great… When I first started barbecuing, I was concerned that the “low and slow” smoking method would increase the risk of food poisoning. I turned to the internet to ease my… If you’re interested in taking your cooking game to the next level, it might be time to explore a BBQ smoker. They bring out a ton of extra flavor during… There are many ways to prepare meat, and each is unique and brings its own flavor profile to the meat. Some of the most common ways are smoked, cured, aged,…